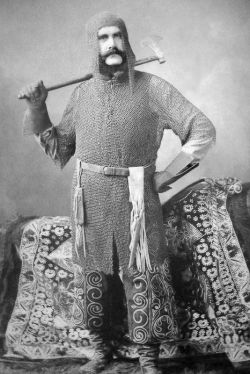 Henry Lansdell in a gift of native garb, as he was wont to record himself in his travels.

As the end of the 19th century approached, Riga was a hub of manufacturing and international commerce—third in size only behind Moscow and St. Petersburg in industrial workforce in the Russian Empire.

The histories of Riga and of Latvia are inexorably entwined. While Riga is the cosmopolitan attraction, for as Henry Lansdell writes: "Here an Englishman who speaks German may feel nearly as much at home as in Prussia or Switzerland, and may study the many curious questions connected with a Lettish and Esthonian peasantry living with a Teutonic aristocracy, and all governed by autocratic Russia," the curious—such as Lansdell—could not but become interested in the indigenous Latvians as well. And so, owing to Riga’s role as a center of commerce for centuries, far more accounts of Riga and her history, along with that of its inhabitants and their land, are available than might be otherwise.

Henry Lansdell (1841–1919) was a retired minister who traveled widely, taking with him an insatiable curiosity which, judging by his writings, opened many doors, offering insights afforded to few others. His journeys across Russia ranged from the Baltics to Vladivostok. Wherever he traveled he documenting everything from flora to local penal systems—bringing the Bible to the imprisoned was a personal quest. A contemporaneous who's who of Christian personalities writes[1]:

LANSDELL, Henry DD. (by Archbishop Canterbury and Queen's letters patent, 1882), Church of England; born at Tenterden Kent January 10, 1841; educated in the London College of Divinity, 1865–67; was ordained deacon 1867, priest 1868, curate of Greenwich 1868–69; secretary to the Irish Church Missions 1869–79; founder and honorary secretary of the Homiletical Society 1874–86; originator and editor of The Clerqyman's Magazine, 1875; curate in charge of St. Peter's Eltham Kent, 1885. He is a member of the Royal Asiatic Society, and of the General Committee of the British Association for the Advancement of Science (life member, 1880); fellow of the Royal Geographical Society, 1876. He has not only since 1870 journeyed the world, and with two exceptions every country of Europe; but he has visited of Siberia, Central Asia, Bokhara, and Khiva, where no Englishman had preceded him. Since 1874 he has gone not only as traveller, but amateur missionary, distributing tracts through Denmark, Sweden, Finland, and Russia, 1874; Norway and Sweden, 1876; Hungary and Transylvania, 1877; tracts and Scriptures through Russia, 1878; Siberia, 1879; Armenia, 1880; Central Asia, 1882. He is the author of Through Siberia, London, 1882, 2 vols. 5th ed. 1883; Russian Central Asia, including Kuldja, Bokhara, Khiva, and Merc, 1885, 2 vols.

Lansdell's travels through today's Latvia and Estonia were part of his epic 1878 trek across Russia. Antonio Gallenga, who provided an introduction to the manager of one of the largest cotton mills in Russia, in Narva (Estonia) for Lansdell, cites Lansdell's journey in the opening of his own book (1882) on Russian travels[2]:

And the Rev. Henry Lansdell, in his five month's journey from the Thames to the mouth of the Amoor, all across the Czar's territory, tells us that he went over 2600 miles by rail, 5700 miles by team, and 3000 by horses; or, altogether, 11,300 miles almost in a straight line.

For the metrically-minded, over 18,000 kilometers.

Lansdell's richly illustrated travelogue, one of a number which appeared in Harper's from 1887 to 1891, is a worthy expression of his intellectual curiosity and brings Russia's Baltic province—today's Latvia and Estonia—to us through tales and personalities reflecting the life of the times. 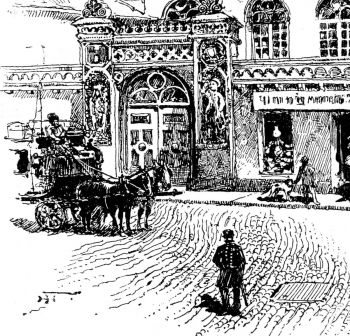 THE HALL OF THE BLACKHEADS, RIGA. (detail from illustration, page 299)

Footnotes and "wikilinks" are our clarifications, primarily to translate place names from the predominant German of the times. Images which dim on mouse-over, as above, open up in a full view.