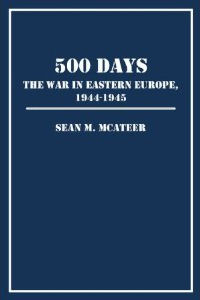 This book is born of McAteer's love of history, based on his studies of the Eastern Front while at the University of Miami, where he graduated in 1986. As a professional lawyer, not historian, one could argue this is the work of an "amateur." Nevertheless, we have found it cited in academic works, confirming this is a valuable introduction to anyone interested in the Eastern Front, particularly in the advance of the Red Army across eastern Europe which left only Latvia's Courland (Kurzeme) territory unconquered.

Some Russian reviewers have complained that Soviet/Russian scholarship is not adequately represented, thereby diminishing the veracity of the work. While a valid observation in that Soviet sources do not factor significantly[1], such complaints also ignore the highly propagandistic nature of Soviet accounts of the "Great Patriotic War." For example, Soviet accounts contend that Red Army forces bypassed the Courland Pocket as non-strategic, and that German and Latvian attempts to break out were hemmed in with low Soviet casualties. Meanwhile, Latvian, German, and western accounts indicate multiple major Soviet offensives as Stalin threw in division upon division to be slaughtered as the Red Army attempted—in vain—to occupy the last bit of Eastern Europe not under their control and to stamp out the Latvians' bid to reclaim their territory in a replay of history following WWI and the declaration of Latvian independence. This version of the battles for the Courland Pocket is borne out in Stalin's repeated personal guarantees to Roosevelt and Churchill that the demise of Courland was imminent. However, it was only with Germany's capitulation that the Soviets achieved their full re-occupation of Latvia, as Britain reneged on radioed promises to evacuate Latvian forces.

McAteer's narrative style works well for the first-time reader investigating the action along the Eastern Front; however, it may leave more serious students wanting for more, such as maps, tables of combatant forces, and a comprehensive index. And another pass at proof-reading would have assisted with some grammatical and spelling errors. Despite these flaws, there are few comprehensive works on the Eastern Front which examine the subject as closely, in stark contrast to the typical cursory coverage mostly devoted to extolling Allied heroism in the face of the Nazi onslaught—accounts of the Eastern Front where Latvian heroism battling furiously against the "Allied" advance, in reality resisting brutal Soviet re-occupation, has no place.