Inside the League: The Shocking Exposé of How Terrorists, Nazis, and Latin American Death Squads Have Infiltrated the World Anti-Communist Leagueby Scott and Jon Lee Anderson (1986) 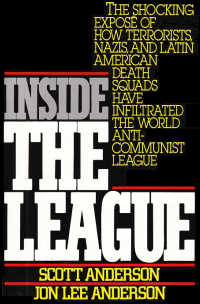 According to the Andersons: émigré Nazis are a powerful force in their ethnic communities and national politics; émigré Nazis are more Nazi than the German Nazis and have been Nazis all along—before, during, and after WWII and the Holocaust; lastly, the United States government actively and knowingly recruited émigré Nazis as front-line soldiers in the Cold War.

Applying the Andersons' portrayal of Latvian collaboration and post-war activities as a litmus test calls out their bias.

The authors give too much credence to German propaganda influencing Eastern Europe, whether Judeo-Boshevik or Judeo-Masonic conspiracies. In truth, the Nazis' own reports back to Berlin bemoaned their inability to incite Latvians against their Jewish neighbors.

Bogus conspiracy theories abound, that Western intelligence actively recruited Eastern European Nazis and brought them to the U.S. and Canada, that these "more Nazi than the Nazis" Nazis had already been firmly entrenched in their native countries as Hitler's operatives in 1936, and that through front groups they now plagued the American political process like a cancer.

The Andersons turn their attention to the Anti-Bolshevik Bloc of Nations (ABN) as the "largest and most important umbrella for Nazi collaborators in the world"—a "virtual 'Who's Who' of those responsible for the massacre of millions of civilians in the bloodiest war in history."

Chief among the criminals the Andersons single out is Alfreds Bērziņš, the chairman of the ABN's council of nations:

"Described ... as 'also a former prisoner of Nazi concentration camps,' Bērziņš was in reality a Latvian who volunteered to serve in a Nazi-sponsored police battalion responsible for the roundup and extermination of his nation's Jews and Communist Party members. In February 1942, he joined the Latvian SS and was awarded the German Iron Cross, First Grade. In exile, he was secretary of the Central Committee of the Dangavas [sic.] Vanagi (“Dangava Hawks”), an organization composed of the Latvian SS officers and government ministers who oversaw the Final Solution in their country."

and go on to describe the Daugavas Vanagi as "a council of Latvian war criminals" and "a band of Latvian leaders who assisted the Nazis in exterminating the Jews of their Baltic homeland."

The Andersons confuse and combine two different Alfreds Bērziņš. The first Bērziņš fought in WWI, rose to head the Latvian National Guard, was voted into Parliament, joined the President's cabinet, escaped the Soviet invasion, was arrested by the Nazis, and incarcerated in Sachsenhausen concentration camp for nearly three years. After the war, Bērziņš emigrated to the U.S. in August 1950, where he became active in the Free Europe Committee, a member of the Assembly of Captive European Nations (ACEN), and in 1951 founded the American Latvian Association (ALA), which supported organizations dedicated to cultural preservation in exile and groups devoted to restoring Latvia's freedom. This Bērziņš was, indeed, a Nazi concentration camp inmate.

The other Bērziņš entered the Latvian Army for mandatory service in 1938, serving 18 months until being demobilized shortly before the Soviet occupation in 1940. When, after the Soviet retreat and German occupation, Bērziņš encountered the mass-grave exhumation of 30 corpses of Latvian prisoners maimed and killed by the Soviets, he voluntarily joined the police battalions which were already fighting as front-line units against the Red Army. In 1942 he was appointed unit commander on the Leningrad front. Bērziņš never participated in any collaborationist war crimes, never exterminated Communists or Jews. Bērziņš was a decorated war hero fighting against Soviet re-invasion, wounded multiple times, holding out in Latvia's Courland (Kurzeme) until the end of the war, the only territory not retaken by the Red Army. This Bērziņš was active in the Daugavas Vanagi after the war, rising to become its general-secretary.

More worrisome than the Andersons' mistaken identities is their propagation of the "Germanless Holocaust", describing the Daugavas Vanagi as "Latvian SS officers and government ministers who oversaw the Final Solution in their country”. There was no independent action by any of Hitler's collaborators, no “overseeing” of any part of the Holocaust. No Latvian was a member of the Nazi party or officer of the criminal Allgemeine SS. There was no such organization as a “Latvian SS” or officers thereof. The Germans entrusted industrialized genocide only to themselves, closely supervising their collaborators who, for the most part, had ancillary duties while the Germans did the killing. The Arājs Kommando collaborators, numbering 300-500 during the Holocaust, were a notable exception in that they were directly involved in the killings, nevertheless, supervised at all times. None of its members ever joined the Daugavas Vanagi, who were founded as a self-help group in Zedelgem POW Camp in Belgium—where Allied guards shot them for live target practice until someone told them the Latvians weren't Nazis.

Returning to the Andersons' portrayal of Latvian "anti-Communists" in WWII and their post-war anti-Soviet activities as a litmus test, the Andersons' exposé fails basic fact checking catastrophically: misspellings; unattributed, false allegations of war crimes; mistaken identities and calling someone's three-year imprisonment in a Nazi concentration camp a lie. In an otherwise copiously annotated work, the Andersons provide not a single citation for their accusations against Latvians. We cannot speak to "Inside the League" as a whole. But of what we have examined, the Andersons have exposed only their own incompetence, bias, or both.