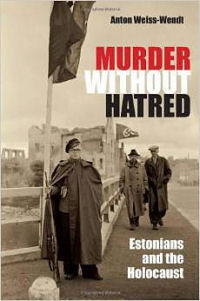 The title is certainly provocative: Estonians killing Jews yet without hatred. Does such a chilling contention of dispassionate cold-blooded murder even make sense?

If you are prepared to read Weiss-Wendt's magnum opus to find out who says what about the Holocaust in Estonia and the wider Baltic states, the work is a veritable compendium of "he-said"s, "she-said"s for those who can tell difference. Weiss-Wendt includes them all: reputable scholars; the German school and others advocating for the Germanless Holocaust; and Soviet archives known to be tainted, containing evidence manufactured to target Baltic and Ukrainian nationals in particular—the USSR's most troublesome nationalities at home and the most visible and organized anti-Communists in the post-WWII diaspora.

Whose account to trust? In one sentence, someone has been saved, cited to a respected Holocaust scholar. The next? A Baltic collaborator orders the deaths of civilians on pure whimsy: brutal, senseless, Germanless, cited directly to Soviet archives. And therein lies the crux of the issue. Voluminous and careful citations are not enough to create a meaningful study of the Holocaust in the Baltics. The responsibility of the historian is to audit and make sense of manifestly incompatible accounts and allegations. In presenting all sources as equally valid, Weiss-Wendt abrogates that responsibility, leaving that task to the wholly unprepared reader.

Moreover, in failing to differentiate between the likely and unlikely—based on our detailed knowledge of the Nazi control and command structure, processes, and procedures pursuing the extinction of Jews in Eastern Europe—his amalgam of diametrically opposed sources unintentionally elevates historical propaganda to a level on par with legitimate historical scholarship. The contradictions Weiss-Wendt ultimately seeks to reconcile lie within the historical accounts which form the basis of his narrative—and not in the Estonian psyche.

Weiss-Wendt's superbly meticulous and voluminously annotated research, with its uncommon and welcome transparency of scholarship, holds the tantalizing promise of a definitive new work on the Holocaust. Ultimately Weiss-Wendt falls short, neither highlighting nor reconciling agendas buried within historical accounts of the Holocaust in the Baltics and Eastern Europe.

Support us! Purchase at Amazon