The Rings of My Tree: A Latvian Woman's Journeyby Jane E. Cunningham (2004) 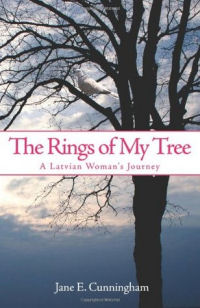 The Rings of My Tree is a well-told story of one young woman's journey starting in pre-WWII Latvia. We follow Jane's friend Mirdza as she is ripped from her beloved home in Liepaja (which was also my mother's home at the time the war started), is separated from family and friends, and ends up, like so many of our own family and relatives, in a Displaced Persons camp in Germany. For those of us that are Latvian, it is a familiar story. However, many Latvians of my generation, including myself, regrettably never heard the whole story from their parents, for one reason or another—most often it was because they were memories they did not want to recall, or that they simply wanted to "spare us." Still, over the years, I had gathered bits and pieces of my parents' separate experiences, and reading Mirdza's account helped me put those pieces into context and understand them better.

Regardless of what your own history is with the WWII and immigrant experience, The Rings of My Tree is well worth reading. As I mentioned, the story is familiar, and there are no great surprises—but I found peace in Mirdza's quiet strength as I read this book. Before reading Mirdza's tale, I had read book reviews that described Mirdza as submissive; I don't agree at all. She was assertive when necessary and smart enough not to make waves in the face of dire consequences, even when threatened with death. In her new home she learned how to get along for the greater good. Like all of the brave Latvians that survived the ravages of war, the camps, and then started over as immigrants in new countries, Mirdza showed great courage and tenacity. She was able to survive separation from family, countless atrocities, a bombing injury that left her with a permanent limp, and extreme prejudice from her new community after finally making it to America—ostracised as a "German" because she had arrived from Germany and spoke English with an accent—all without a single trace of bitterness. To face every day anew, with quiet inner strength, required the heights of courage.

I'm writing this review from a personal perspective for a reason. I've corresponded with the author several times. Moreover, reading the book motivated me to finally sit down with my father and interview him about his experiences during and after the war. My parents had always been reluctant to talk about those times; it was just too painful. My mother passed away several years ago, and my father always looked forward to my monthly visits and loved to chat so I had a feeling he'd be ready to tell his story. He agreed, but he wasn't feeling well, so I put it off. Unfortunately, he passed away Christmas Day, 2004. Now his story will never be told. So I urge you, fellow Latvians, read this book. If you have stories of your own to tell, tell them, and if you have parents living to share their stories, have them do so while there is still time, that is, if they're at all willing.

Support us! Purchase at Amazon