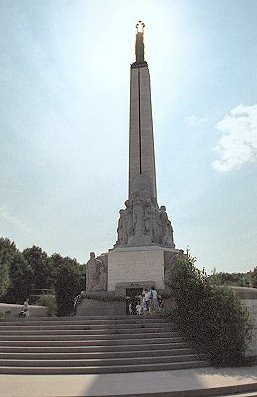 Latvia's Brīvības Piemineklis (Freedom Monument) is perhaps the most familiar of Latvian symbols after the Latvian flag itself. Designed by the sculptor Kārlis Zāle, who also designed Brāļu Kapi (Breathren Cemetery), it pays homage to Latvian culture and history—its figures and bas-reliefs depicting heroes, heroines, and the common Latvian people. Atop, the Liberty statue, known more familiarly as Milda, holds three stars atop her head for the three major regions of Latvia: Kurzeme, Vidzeme, and Latgale. (It was erected where Riga's prior central monument, that of Peter the Great, had stood at the entrance into the old town—thus reinforcing its symbolism of freedom.)

The monument was erected using funds gathered from private donations—Peters' mother recalls their own family answering the call “Ja ikviens tik vienu latu...” (If there were just one lat from each of us...)—and so was truly a monument erected by the people.

The Soviet Union co-oopted and perverted its symbolism: now, the three stars stood for Estonia, Latvia, and Lithuania, and the monument had been erected as a thanks to Stalin for his “liberation” of the Baltics. As with most of Soviet propaganda and fiction, this story took on a cloak of veracity through its endless repetition—even ten years after Latvian independence a British tourism brochure retold the “Stalinist” version, verbatim!

The monument was cleaned and restored following the restoration of independence, again, through donations. Peters made a donation while in Latvia on vacation, carrying on the family tradition—and adjusted for inflation—and had the good timing and fortune to attend its rededication.

As for the deeper and detailed symbolisms of the monument, we have to admit that we've been more admirers of form than scholars of metaphors. However, the monument's meaning took on much more clarity for us when we came across the book Brīvības Piemineklis, written by Jānis Siliņš and published in 1935 by the Brīvības Pieminekļa Komiteja (Freedom Monument Committee). Siliņš himself began as a professional artist before embarking on a career as a respected art historian and critic. The Latvian love of purple prose is clearly evident in Siliņš text—still, his narrative as informative now as it was when first published eighty-five years ago.