Jānis ČaksteIn Memory of the First President of Latvia

On our trip to Latvia in 2002, we came across this biographical sketch and album of more than 50 pictures, published by the Latvian Young People's Christian Society "Christian Endevor" in memory of Čakste shortly after his passing. What makes it all the more unique is that it is all translated into English. We hope you find it interesting and informative and perhaps it well lend some insight into Čakste and the national awakening he helped lead to its fruition in an independent Latvia. 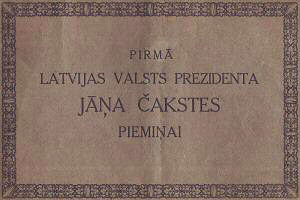 Those peoples may be said to possess vitality, which do not neglect the work of their great sons but follow the trails that they have blazed. The masses quickly loses their way, to err helplessly in darkness. He alone fails to go astray who tries to recall how national heroes and leaders acted in similar circumstances. This idea is not new. The Scriptures teach us "to consider the end of their (i.e., the national heroes') lives and to walk in the footsteps of their faith," and a wise philosopher has expressed the same thought in these words: "Let every mortal choose a hero for his pattern that, following in his steps, he might reach the summit of Olympus."

Among the heroes, to whom the youth of Latvia can always confidently turn its eyes, is our first president, the late Jānis Čakste. Let us glance for a moment at his life's history.

If a man, in his earliest youth, sets himself an object of high endeavour above and apart from the mere earning of his daily bread and if he clings to it until his death, the world is the richer by a noble character and its annals by a fine biography. Such a man was Jānis Čakste; and the object, which he set himself, was the fostering of Latvian nationalism. Inspired by the ideals of our people's greatest sons   Valdemars, Brivzemnieks and Barons   Čakste came as a convinced nationalist from Moscow, where he had completed his legal studies, to start a solicitor's practice in Jelgava. Before long he was in the thick of the national movement. He was elected president of the Latvian Association in Jelgava and began to contemplate the publication of a national organ. But at this juncture Pobedonostsev[1] initiated his policy of russification. The Russians wanted to tear the Latvians out of the clutches of the Germans and to efface their national identity themselves. It is obvious that a people, which has been condemned to be extirpated, cannot be granted freedom of speech, and so Čakste was not permitted to found his newspaper. A way out, however, was happily discovered. In 1887 the industrious but ailing Dr. Bullis, who had taken over Pastor Krauklis' weekly, "Tevija", which had been licensed in the interests of russification, died in Jelgava. In the following year Čakste received the concession of this newspaper, and one of the most brilliant phases in his life ensued.

Although the russification of the Baltic Provinces had already begun in all its malignancy, there was still a large proportion of pseudo-Germans among the educated of Zemgale and Kurzeme. To say nothing of the academically trained, every manorial scribe, every steward and village schoolmaster wallowed in the waters of Germanism, aping German speech and German manners. In view of this it was the chief purpose of Čakste's publication to protect Latvian youth against russification and to rouse the distressed in mind and the dispirited to a new, joyous and intrinsically Latvian spiritual life. And success came quickly. With his frank and open disposition and his considerate attitude to those less educated than he was, Čakste soon won for himself, in almost every district of Zemgale and Kurzeme, a host of influential friends, who, in their turn, helped to increase the circulation of his organ. In a short space of time the "'Tevija" came to be very widely read and exercised a profound influence on the national movement. Societies were founded, and the wealthier parents sent their children to the higher schools in Jelgava. There Čakste's influence manifested itself by the pupils becoming strongly national in sentiment. In the high task of furthering the national revival, Andrejs Sterste and, later, Jānis Veismanis (Pavasaru Jānis) also laboured with admirable self-denial.

After a time, Čakste began in his periodical to examine and pronounce upon the more pressing issues in the social life of the Latvians. Articles appeared in the "Tevija" on agrarian reform. The Censor [Pobedonostsev], in the exercise of his calling, handled the newspaper roughly, but nevertheless Čakste somehow managed to give expression to the view that more land ought to be given to those who tilled the soil. This view Čakste later upheld as a member of the Russian Duma. It should be mentioned furthermore, that in Čakste's time the fourth Latvian musical festival was, held in Jelgava and that he had his share in making the requisite arrangements for it. Also, the 30th August became a national holiday in his time all over Zemgale, so that people of every calling and persuasion could meet to discuss the more urgent social questions. At about the same period training courses for teachers were started in Jelgava to further the objects of russification, but thanks to the efforts of the Latvian Association and of Čakste these served to strengthen, rather than to weaken, the national movement.

An episode, which harks back to those times, comes to mind. Two Russians were abusing Čakste. Čakste, they declared, had invented a new 'French' (i.e., foreign) language. Even army officers were beginning to speak it. Until then army officers had always spoken among themselves in Russian.

We have purposely dwelt at some length on the first of the two phases in Čakste's career, because it is almost unfamiliar to the younger generation of our people. The second and final phase was enacted before the nation's eyes and the memory of it still lingers. This phase might be entitled: "All for Latvia"

In 1906 Jānis Čakste was elected as the representative of Zemgale to the Russian Duma. There he staunchly upheld the cause of liberty and justice and bore with fortitude the persecution of the Russian Government in the matter of the signing of the famous Viborg Manifesto.[2]

During the period of the emigration, Čakste worked ardently to alleviate the condition of the unfortunate refugees.

When Latvia achieved her independence, Čakste was called upon to be her foremost worker. The Nation felt confident that his hand was strong enough to steer the barque of Latvia. through troubled waters safely into a quiet haven. In November 1918, while working at his bench in Auce, he learnt that the National Council had elected him as its first president. He went abroad and conducted successful negotiations for the recognition of Latvia by the Great Powers.

On the 1st May 1920, the Constitutional Assembly nominated Čakste as its chairman.

When finally the Saeima began to look round for a first president for Latvia, all eyes turned towards him as at the touch of a magic wand. Twice it placed the tiller into his clean and trustworthy hands. He was elected president for the first time on November 14, 1922 and for the second time on November 6, 1925.

In closing this brief introduction to the "Jānis Čakste Memorial Album" we can hardly do better than quote the final words of the profoundly moving funeral oration, which Jaan Lattik, the Esthonian Minister of Public Instruction, delivered at the late president's grave: "Life still runs its course, though our friend is no longer with us. Yet his life's work and his love remain. God, dry the tears in the eyes of the Latvian people and save Latvia."

Continue on to album

We've presented the pictures in as close to the original order in the album as possible. The album is in poor condition and we have done our best to optimize the picture quality.