The Rīga Skyline—Then and Now

It's a scene familiar to anyone with a good Latvian history book: the Riga skyline as it appeared in the mid-16th century, still instantly recognizable today: 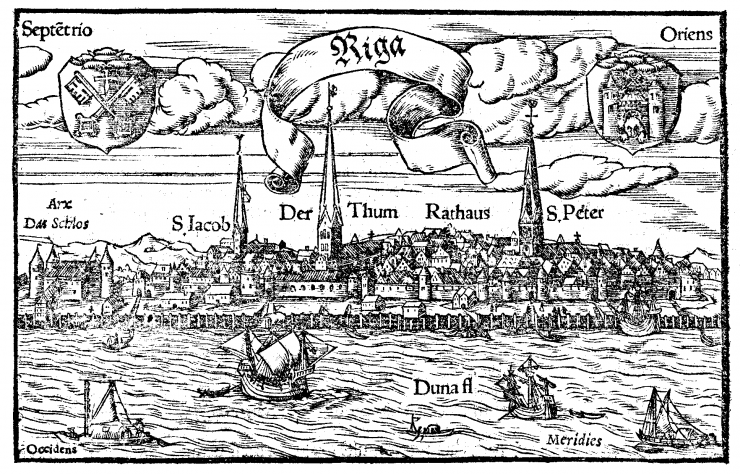 We've always admired this particular woodcut both for its artistry and its uncanny similarity to the Riga of today. To be honest, it has also been a source of pride that Rīga was a preeminent global city in its heyday, albeit that rise was at the cost of German hegemony over the Baltics. It's also discouraging that Russia's growing post-Soviet authoritarianism and warring point to Rīga never re-establishing itself as a major western transit port serving the Russian interior.

Our photo, squeezed in from the sides to match the woodcut. Only St. Jacob's still has its original spire. 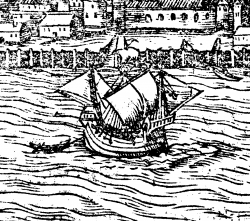 Our scan is of an original leaf taken from the 1575 French edition of Sebastian Munster's epic encyclopedic work, the Cosmographia Universalis.

It was only after we had the leaf in our possession that we discovered this was more than a pretty picture. It was the lead illustration for an article about the Latvians. The article is most notable because it contains among the the very first published samples of the Latvian language, the Lord's Prayer. Tantalizingly, frustratingly, our single leaf ends right in the middle:

Sebastian Münster (1489-1552) was born in Ingelheim, Germany, and lived for the latter part of his life in Basel, Switzerland. His interests and talents spanned mathematics, Hebrew linguistics and scholarship, and cartography. In 1544 he published the Cosmographia, the culmination of his academic career, containing more than 500 woodcut pages. The Cosmographia was issued in 46 editions—pre-dating its intellectual progeny, the Encyclopaedia Britannica, by more than two centuries. Editions included: