The encyclopedia and author

We were unfamiliar with both the author and source (a disbound encyclopedia) of the article we had purchased; it was cut out of Peoples of All Nations: Their Life Today and Story of Their Past (a 7 volume set), editor Sir J. A. Hammerton, first published in 1920 and appearing in multiple editions including a subscription series.

The New Europe in the aftermath of World War I and its felling of empires was of immense interest. Quoting from the introduction of the first edition:

Peoples and nations are words that have been much on tongue and pen in recent years. Since the outbreak of the Great War national spirit has been more active in the minds of men than at any other time in history. By its very existence the League Of Nations recognizes the ineluctable fact of nationalism, though an eminent statesman, in describing the spirit of nationalism as “the curse of Europe” looks to the League somehow to abolish that spirit, and one of our seers, among his after-war visions, has seen a “world state,” in which, presumably, national distinctions are blurred and all humanity exists in some strange neutral tint. A proper knowledge of the races of mankind that are sharing with us in the life of the globe today is essential to anyone who would lay claim to be decently educated. It scarcely needed the Great War to make intelligent persons understand how the complex machinery of modern civilization has brought peoples of very distant areas of the earth into a relationship, the closeness of which is often realized only when some temporary breakdown in that machinery occurs. The war at least made plain to the most unobservant that no nation can live unto itself alone, and in that degree it stimulated the sort of study which this work seeks to advance. It was determined that the task of presenting and entirely new picture of the post-war world in its living actuality should be attempted, and, after due consideration, the national unit was found to offer the most practical method of treatment. By arranging the nations of the world in their alphabetical order, rather than following any geographical sequence, a pleasing variety of subject resulted. Merely to describe the peoples of all nations in their habits as they live, and to illustrate them profusely, did not seem adequate to the purpose in hand; hence the historical chapters, in which every nation's story is briefly retold by skilled historians.

The “skilled historian” authoring the article here on "Lettish life" is Florence Farmborough—someone we had not encountered earlier in writings on the Baltic States. Farmborough came to prominence as a nurse, volunteering in 1914 and subsequently serving on the front in Galicia and Romania. She would have been a remarkable woman in any time; from her obituary appearing in The Times of August 21, 1978:

Miss Florence Farmborough, whose work with the Russian Red Cross during the First World War was honoured by life membership of the British Red Cross in 1974, died on August 18 at the age of 91.

Miss Farmborough's achievement was doubly notable—as a courageous nurse never far behind the line in Galicia, and as a faithful observer and recorder of the bravery and misery, the day-by-day comments, and the increasing acts of desertion and treachery of the officers and men of the Tsarist Army during the period of its increasing breakdown, which played a part in the triumph of the revolutionaries. 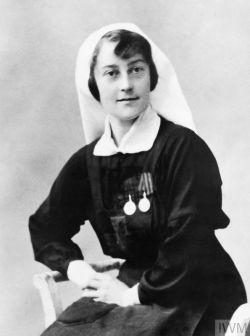 Born on April 15, 1887, of a Buckinghamshire family, she went to work in Kiev in 1908, moving after two years to teach English to a Moscow surgeon's daughters. In August 1914 she volunteered as a nurse and went first to the Galician and later to the Romanian front. Throughout her service with the 10th Field Surgical Otryad of the Zemstve[1] she kept a diary, and wherever possible took photographs, carrying with her under almost impossible conditions a plate camera and tripod, and developing the plates in makeshift darkrooms in the field. The record survived trench warfare, advances and retreats, a journey across Siberia, and eventual escape through Vladivostock. That final phase was vividly described by her in an article, “Three Weeks in a Coal Siding in Vladivostock”, which appeared in the Times of September 11, 1918, before the world war ended.

There the story could have finished, but in April 1971, when she was 84, Miss Farmborough, arranged an exhibition of her photographs and souvenirs at Hoswall, Cheshire. Persuaded to publish, she declined a ghost writer and herself reduced her diary of 400,000 words to manageable size, and selected the best of her photographs for the book of her experiences, Nurse at the Russian Front, published by Constable in 1974.

It was hailed by the Times Literary Supplement both for its vivid detail and for its “most enthralling, moving, and valuable historical testimony”—valuable because it supplemented the testimony of people like the professor, Bernard Pares, and the military attaché, General Sir Alfred Knox, as personal observation which, though less pretentious than theirs in scope and spirit, was more compelling reading.

After her experiences in Russia Miss Farmborough went to Spain and lectured for nine years in English at the University of Luis Vives in Valencia. During the Spanish Civil War she worked for General France, and read daily bulletins broadcast in English by Spanish National Radio.

In the Battle of Britain she was back in London with the Women's Voluntary Service, and worked especially on rehabilitating Spanish-speaking Gibraltarians. When linguists were required by the Government for Jamaica, she spent four years censoring foreign correspondence to South America.

Always fond of travel—she revisited Russia in 1962 and at nearly 80 years of age went to the Holy Land—she spent her last years close to friends and family in Heswall, and finally at the home of her nephew, the Rev. J. L. M. Farmborough, Vicar of Marple, where she died.

Absent, however, is any mention of Farmborough's apparent travels among the newly independent Baltic and Eastern European countries after her escape from Bolshevik Russia—Hammerton's encyclopedia also includes her articles on Finland, Estonia, Lithuania, and Poland (that we have identified to date). Telling is that Farmborough's richly illustrated articles include numerous photographs unattributed to any other source, leading us to conclude they are her own—a record of Farmborough's itinerary and a testament to her being no armchair traveler. We have contacted The Times about Farmborough's being listed as their “Special Correspondent” in hopes of finding out more information.

Farmborough's writing conveys her unmistakeable sense of kinship with a country and people of a spirit as indefatigable as her own. We have found no other contemporaneous account from an outside observer which better captures the determination and optimism of the newly independent Latvia even as it recovered from the devastation of war wrought by invaders on two fronts, both Germany and Russia—a devastation both powers would revisit upon the Baltics in less than a generation.

The Baltic state of Latvia

An example of national dress

Wood is used for construction and for fuel

Flax is a major agricultural product

Peeling potatoes for a savoury meal

Assembly of the first Latvian parliament

"Handsome Trio of the Rustic Population"

Refreshments on a break from working hard in the fields

The ancient art of bee-keeping

Boats and fishing nets by on the coast

Fishermen in the old tradition

Salt being unloaded in the port of Libau (Liepāja)

The famous costume embroidery of Rucava

Our research shows Peoples of All Nations has been republished in a 14 volume edition issued in 2007 by Logos Press, New Delhi, India (ISBN-13: 978-81-7268-144-9). That is a derivative copyrighted work of the original based (apparently) on dividing the encyclopedia into twice the number of original volumes. The original is in the pubic domain. The materials presented here are based on our high resolution (1200 DPI) scans of the original publication.