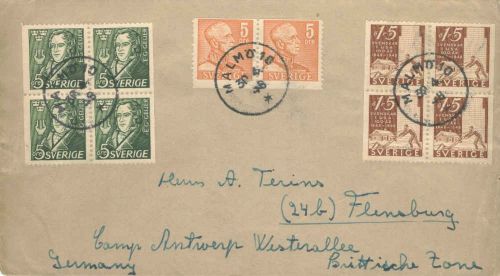 Letter addressed to a Mr. A. Teriņš in Antwerp-Westerallee camp 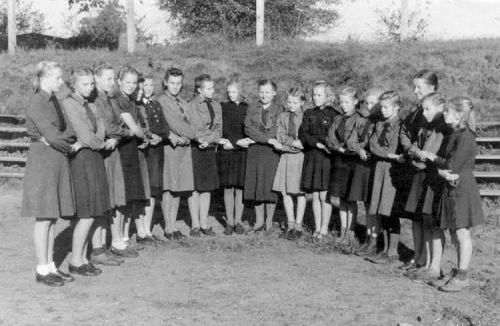 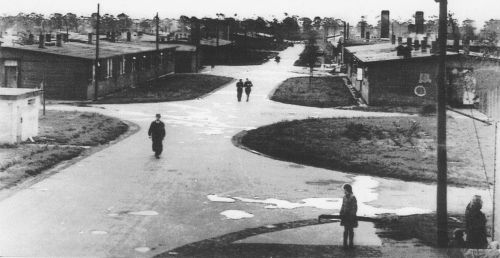 A view of Antwerp-Westerallee DP Camp from the camp gate.[4]

Camp residents included Latvians, Lithuanians, Poles, and Ukrainians.[5] As uncertain as the future was in the DP camps, life was likely even more stressful in Flensburg. In an act of forced repatriation, a potential death sentence for those who fled the Soviets, "British soldiers reportedly surrounded 500 Ukrainian DPs at Flensburg in August 1945 and dragged them away, assisted by Soviet NKVD (secret police) agents."[6] What could be more unnerving than the thought that the very same Soviet thugs who came in the early hours of the morning to rip family, relatives, friends out of their beds to deport them to Siberia, had come for refugees in the very camp where you now resided? We can't even imagine.

All the more reason to hold on tight to "Latviskā Virtuve" as a vestige of a Latvia and life lost.

As the end of the war approached, Flensburg became both a transit point and haven after Soviet forces broke through the East Prussia front in the summer of 1944. The only escape route for refugees was north. Two million were evacuated via the Baltic. Others were dusted with DDT for lice and ushered westward. These included not only refugees such as our parents, who had fled down the Baltic and arrived in Danzig (Gdansk), moving west from occupied Poland, but Germans fleeing their homes in Königsberg and East Prussia ahead of a devastating Soviet occupation as the Red Army pillaged and raped their way across pre-war German territory. Indeed, Germans reported that the Russians raped every woman from 8 to 80 in East Prussia.[9]

While the UNRRA camps came and went, Flensburg continued to struggle with its homeless population born of post-war refugees. Indeed, in 1960 "there were still 2,436 people in camps. Only in 1966, twenty years after the and of the war, did Flensburg Nachrichten ("The Flensburg News") run the headline: "Flensburg's Last Barracks Vacated." But that was only officially. Unofficially, people continued to live in camps, precipitating a homeless crisis in the 1970's.

Public outrage exploded as conditions in Flensburg's homeless shelters became catastrophic for its inhabitants, characterized by poverty, overcrowding, and unsanitary conditions. Of the 600 who died in shelters in 1969, more than half were children. Some public officials even declared Flensburg's homeless problem "immutable." Slowly, conditions in the Schleswig-Holstein district were addressed, including federal assistance.

Homelessness decreased through the 1980's, but rose again in the aftermath of unification as "East" Germans flowed to former West Germany seeking better opportunities. In the 1990's city authorities worked to lower eviction rates in housing, also (finally) establishing a "Department for the Homeless." While the homeless issue is largely addressed by 2000, challenges persist, for example, in prociding suitable housing for larger families of limited means and sufficient employment opportunities.

In some sense, then, our parents fared better than Germans who remained post-war refugees in their own country after the UNRRA camps were gone. To enter the United States, they were required to have sponsors, required to have jobs lined up (no matter how menial) and a place to stay (including a month's rent paid up front, if applicable). Had they truly gotten off the boat with just the belongings they could carry, without those first stepping stones set in place, who knows how long it would have taken them to get back on their feet. Post-1940's Flensburg offers a sobering possibility.