While searching for a picture of a kvass wagon recently, we ran across an entire fold-out set of images of Soviet-era Rīga that we had scanned well over a decade ago: 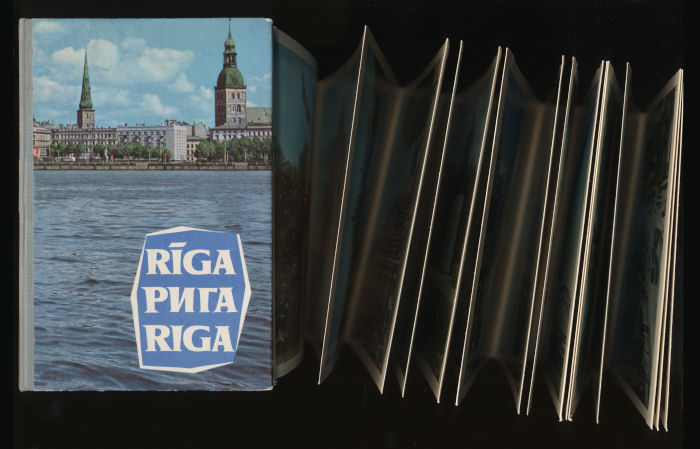 In addition to descriptions of the pictures, 32 in all plus covers, the album includes a short overview of Rīga in each of the languages included. Quoting the English version:

Capital of the Latvian Soviet Socialist Republic and second only to Leningrad in its importance as a Soviet port on the shores of the Baltic Sea, the city of Riga lies a little above the point where the Daugava River empties into the Gulf of Riga.

With a population of over 600,000 Riga is an important economic, cultural and scientific centre and one of the largest cities of the Baltic Republics.

It is in the years that followed the admission of Latvia into the family of Soviet Republics that the growth of Riga has been particularly rapid. Its industrial pattern has changed. In the past, industries manufacturing consumer goods predominated and while these continued to expand the city also witnessed a substantial development of such branches of heavy industry as metal processing, engineering, electrical engineering and chemistry.

Riga is the home of the Academy of Science of the Latvian S.S.R. with its network of research institutes and has, besides, 9 higher educational establishments, over 20 specialised secondary schools, 7 theatres and 9 museums.

Among the Baltic cities Riga is one of the most beautiful as well as one of the oldest. Historical landmarks such as towers, castles and churches dating back to the XIII-XVI centuries are to be found in the city's older quarters creating— together with the modern architectural ensembles of the newer quarters, the numerous parks and gardens and wide streets and squares—an unforgettable vista of the Latvian capital.

The set does betray its Kremlin origins. For example, it translates "Domas Cathedral" as "Thinker's Cathedral," misinterpreting Latvian (as "doma" meaning "thought", "domas" being the possessive) or attempting to wipe Germans from Latvian history—or both. In German, "Dom" or "Domkirsche" simply denotes a church of particular importance or special status. In this case, Bishop Albert moved the Livonian bishopric from Ikšķile (Uexküll) to Rīga in 1201, subsequently laying the Dom cornerstone in 1211.

Still, it's an interesting historical study carrying on the tradition of the Potemkin village glossing over authoritarian reality, including some heavy-handed retouching here. It's a microcosm of the Soviet "method":

We hope you find these as informative a look into portrayals of the Soviet era as we did in "rediscovering" them.

Inside cover—Scene in the City Park

Monument to V. I. Lenin sculptured by V. Ingals and V. Bogolyubov in 1950

Boulevard of the Communards

Boulevard of the Communards (reverse)

Building of the Council of Ministers of the Latvian S.S.R.

Building of the Economic Council of the Latvian S.S.R.

In this house on Kirov Street in 1888-1900 lived Peteris Stucka, prominent leader of the Latvian Communist Party. Here in the spring of 1900 V. I. Lenin had meetings with members of the Latvian social-democratic movement

Building of the Academy of Science of the Latvian S.S.R. (noted as the "Palace of Knowledge" in every language except English)

Academy of Arts of the Latvian S.S.R.

Museum of Latvian and Russian Art

Riga Castle, built in the XIV century, home of the Central Museum of History of the Latvian S.S.R., the Janis Rainis Memorial Museum of Literature and the Fine Arts Museum

Monument to the Heroes of 13 January 1905, by sculptor A. Terpilovsky. Erected on the ground where the tsarist troops opened fire on the demon­strating workers of Riga in the days of the first bourgeois-democratic Russian revolution.

Monument over the tomb of Janis Rainis (1865-1929), great Latvian poet and revolutionary

Monument over the tomb of Janis Rainis (reverse)